This router is the little brother of the WZR-HP-AG300H. Not many things set the two apart but nevertheless the heavy user might find these to be a deal breaker.

The router packs 64mb Ram used for running DD-WRT firmware. As the other routers in this series the WZR-HP-G300NH has the AOSS one push button setup making the installation and setup a breeze. The router supports both N150 and N300, but it is not a dual band router as the big brother.

Using the WZR-HP-G300NH to Unblock and Other Services

As with all the other routers in this series the WZR-HP-G300NH runs DD-WRT firmware. This will allow us to connect to Unlocator (Yes that is their name) and 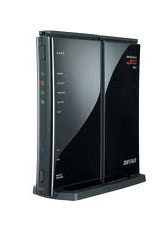 hereby bypass the US only restrictions of . This is even a great solution for viewers in countries such as Canada that already have , but want to larger selection available at the US site.

Devices such as the Apple TV, Roku Box, Boxee Box, Xbox 360, Playstation 3, Wii, Nintendo 3D, HD TVs, Blu-Ray players and set-top boxes do not have a build in VPN client. This is where the WZR-HP-G300NH comes in handy, as it will be able to create the VPN tunnel needed to unblock . The Buffalo router series is recommended by Unlocator for in router VPN connections.

The router is just $65 from Amazon